Recognizing the overly punitive consequences of having a youth arrest record, Representative Slaughter passed landmark legislation to automatically and retroactively expunge juvenile records that did not result in criminal convictions. (Public Act 100-1162)

As a trailer bill to Illinois’ historic Bail Reform Act, Representative Slaughter was the Chief Sponsor of critical legislation that clarified and established what offenses are eligible for bail relief. This legislation also clarified how the dollar-per-day credit provision is applied to the bail amount for each day in jail awaiting trial. (Public Act 100-0929)

Advocating for Family Unification of those Incarcerated

In an effort to keep families together that are impacted by the criminal justice system, Representative Slaughter passed legislation requiring the Illinois Department of Corrections to increase the number of family visits for incarcerated individuals. This legislation also expands the list of eligible and approved visitors that an inmate can have. (Public Act 100-0677) 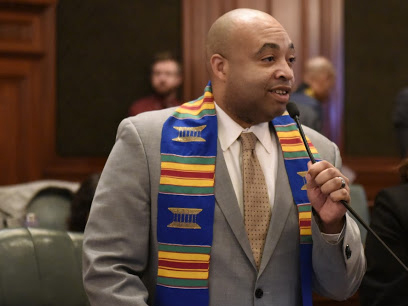